And common problems with this stroke.

Learning the topspin forehand can be relatively easy for a semi-beginner. I say “can be”…….. if that person fell out of the cradle with the feeling for the correct swing (including the J- swing.)

For a player who has been hitting a flattish or underspun forehand for some time, it can be an absolute nightmare !

And that is because there are several elements which make up the foundation for the topspin forehand. And they are all linked, so once you break one of those items you will then be forced to adjust all remaining items……if you want to hit the ball in !

A good example of making adjustments or adjusting your stroke in order to hit the ball in is shown in the following story. Visualize a small table with one leg the correct height and the other three legs of different length. The table top will not be level. To make the top level and stable (hit the ball in) we will have to start making adjustments. Lets say we put one small brick under one leg to bring it to the correct height. The table may still not be level and definitely will not be stable. So we have to go to the next leg and lets say put down two small bricks. Still the same problem, so we go to the last leg and lets say we put down three small bricks. Only now do we have the table level AND stable (can hit the ball in). This table of course is not perfect (perfect stroke), but can get the job done ( a compensating stroke).

So going backwards, what happens if we take just one of those bricks and throw it away ? The table (your stroke) would have a major flaw and in order to hit some balls in you would start compensating and if you do that often enough, that becomes habit and you are left with a weak stroke. Or a stroke with a weakness in it. That weakness will crack under pressure.

And usually the player with the underspun forehand will have at least one key item incorrect or non existent, leading to those movements and adjustments becoming habit.   And breaking those incorrect habits is what makes learning the new stroke so difficult.

In the main corrections like these can be broken into two segments. You need to study the correct stroke and get your technique correct. But then you need to realize which parts of your old technique are killing your forehand, as these incorrect sections will force you to adopt a forehand with poor technique.

For example you may have had too short a backswing all this time, so you will need to learn that the body must turn more and the racket swing must go further back..

And you may have been one of those players who did nothing (whilst the ball was coming towards you), until it was almost completely on you…..and then everything went into a mad rush. So you will need to train yourself to react earlier and begin your stroke preparation much earlier.

So definitely look for the two different sections of stroke improvement.

So which are the items which are definitely needed for a good, consistent topspin forehand ?

The racket face most definitely needs to be closed, although the degree of closure will be quite small.

J Swing (needs to be there) 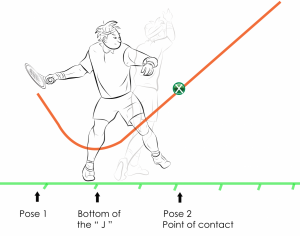 One big thing to realize is that the J Swing takes much more time to make and travel than the Slice swing. Thus you must begin the forward swing much earlier than you would with the slice swing in order to make contact with the ball in the perfect location for the perfect point of contact. See above pic, Pose 2. The green cross is the correct point of contact. Waist height and a little in front of the body. As you can see, the swing will by this time be travelling up v travelling down for the slice forehand.

Being in the wrong place (disaster) 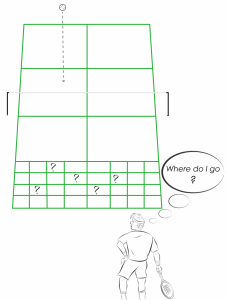 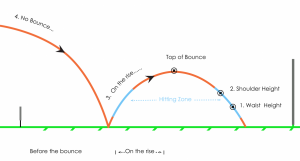 The second diagram shows you how far forward and back you need to go (item 1 would be the correct location for you at this stage). The first diagram is showing both movements. Forward and back AND left and right. In the first diagram there would be only one square you would go to in order to marry with a ball coming towards you. 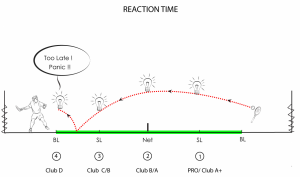 Should you begin late on a fast ball and/or deep ball there is no way you will have the time to make the complete body turn, correct length of backswing, correct amount of footwork, J Swing and still hit the ball in front.

Not turning the body enough (encourages a chop/slice forward swing) 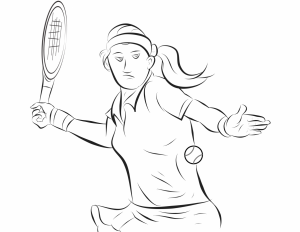 Too short a backswing (encourages a chop/slice forward swing)

From your ready pose (Pose 0), your upper body will need to turn 90 degrees.  Anything involved with moving the body…..takes time !!

Details of the Slice Forehand. 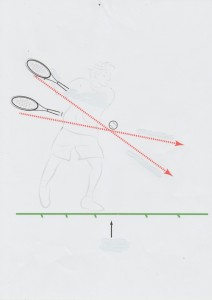 Players who have a sliced or chop forehand do not have the J Swing element in their stroke. Obviously the swing will be going down as it passes through the ball; and obviously if you want the ball to get over the net your racket face will need to be open. Obviously this imparts backspin (slice) to the ball and not topspin.

Brushing the ball ( needs to be there) 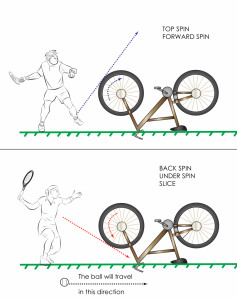 Brushing the ball seems to be quite difficult for many players. Visualization may help. Brushing your shoes, brushing your hair, brushing your teeth. (You are not using a sledgehammer to knock your teeth out). For players having difficulty achieving brushing of the ball, they need to work on maximum brushing of the ball. Maximum brushing creates maximum spin of the ball. Players who have sliced their forehands all their life nearly always can brush the ball under the ball (slice….drop shot), but have great difficulty brushing up at the back of the ball. I guess that is because they are so accustomed to having the racket face open, so when they swing up they still tilt the face in an open position. And picture, your arm and racket swinging up, BUT with the racket face open, which spin do you get on the ball ?   You will get either flattish (loss of topspin) or even backspin.

Point of contact too low (disaster if learning the Topspin Forehand for the first time). 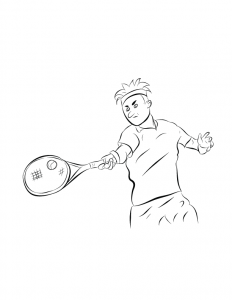 The above sketch shows the correct height of contact (waist height). Again, make the picture in your mind. If you make contact at ankle height and you want to hit the ball over the net….you will need to open the racket face in order to lift the ball up. Which sport does that resemble ?   Golf. Which spin do golf shots have ?   Backspin (slice in tennis terms).

So do not make a golf shot if you want to have a topspin forehand.