So how important are tactics ?

If you have a giant versus an ant (or Dad versus a five year old) I do not think that tactics will  make a difference to the outcome. But if you have a fox versus a sheep, the fox will usually win even though the sheep is much bigger. Why ?  Because the fox will almost certainly outwit the sheep by using good tactics.  If you have two equally strong opponents the outcome most definitely can be influenced by the use of correct tactics.

Wimbledon is currently on and many of you will be watching many matches over the coming fortnight. There will be many close matches. Many players will be trying to employ tactics which will swing the match their way. When everything else is equal, the player who employs the better tactics will win every time. But for the average viewer it can be hard to see.  Federer against Nadal on clay finds that his backhand is a liability. Wawrinka in the same situation has no problems with his backhand.  You or I, today  playing Federer’s backhand would not find a weakness in it. So finding weaknesses in opponents can be very subtle, which makes it very hard for the average club player to recognise tactics used by some of the pros.

A wonderful example of this was covered in a recent post from Wimbledon talking about interesting past matches. This one referred to Arthur Ashe defeating Jimmy Connors in a Wimbledon singles final. Connors was the number 1 player in the world; bookmakers gave Arthur no chance of winning. Arthur decided that Connors loved the fast, hard hit ball too much. So Arthur decided to give Jimmy nothing but soft balls with no pace, forcing Jimmy to have to create all his own power. This tactic worked as Arthur won quite easily in the end. In the main not very many people would have noticed Arthur deliberately taking the pace off the ball.

So when watching the pros (like at Wimbledon) there will be many attempts by the players to get the right tactics for any given match . Will you see it ?  Maybe ?   This choice of tactics of course explains many strange results or even upsets. Including player X defeating a top ten player one day; but then losing the next day to a player outside the top 60 in the world. Often the player X was able to find and employ the correct tactics against that higher ranked player. It could be the big lefty swinging serve which takes the opponent out wide AND low to their backhand. But the next day those tactics may not work against a different player. And then player X would need to use different tactics; but if he does not have the technique to go along with those tactics he cannot get that magical result.  One of your general master plans for any match is to always be able to pit your strength against your opponent’s weakness. Your biggest nightmare would be getting sucked into a match where the majority of the match has your weakness pitted against your opponent’s strength.

Also, players who play against each other get to know each player’s strength and weakness’s really well. Firstly by actually hitting the ball many times to a certain spot or stroke and then seeing the result. And secondly they get to learn these things by hearing other players talk about it.

On the world circuit you would often see two players from the same country come up against each other. Let us say they are ranked 5 and 8 in their own country. The day before the 8th ranked player may have beaten the number one seed in the tournament. But then had to face his own county man in the next round. Who would you pick to win ?  Well for me, if I were to bet, I would go with the number 5 player. And in my career that is what happened the majority of times. Why is this so ?  Well the player from your own country….you probably have played several times before. And you have some psychological pressure as they are ranked higher than you and you know it. Plus each of you should know everything about each other’s game. However when you go to another country (or state) and often play players you know nothing about, then you and your opponent  do not have that extra knowledge on each other’s strength and weaknesses. Plus psychologically you go in neutral to the match with a stranger and no one has previously convinced you (previous match play results do count) that your opponent is a better player than you. 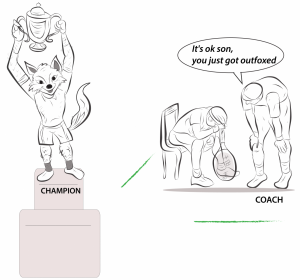