So what is with these Match Statistics ?

So you are a C Grade tennis player, playing some club matches and or some tournaments, and you hear this talk about match stats.And you ask yourself “do I really need these ?…..it is only a C Grade tournament”. Well the answer lies in one of your previous choices.

Did you put up your hand to make maximum improvement ? Do you want to become the best tennis player possible for you ? If the answer is yes, then you need match stats. Tom Coughlin, the coach of my beloved New York Giants football team has a great saying……..All In.  It means you had better look and work at all areas of your game. And match stats do not lie. They tell it as it is.

A few times the major cause of a match loss lies outside the realm of tennis. Like a major emotional incident which is external to your tennis match (like a family death for example). But most times the true cause of the match result can be clearly seen in the summary of the match stats.

An obvious example would be a player who double faults at least once every service game, and commits three times as many errors as winners.  Or another example may be the player who is quite even with his opponent in most areas. However in this case if this player is never double faulting but getting only five percent of his first serves in, he will lose every time to a solid all round opponent.

So if possible, have someone record your points in a match and then put them into a summary of your match stats. This summary should then be pasted into your Match Results Journal. This journal should have a record of every single match you play, and it will have valuable information in it. What are you going to do with this information ?

You are going to use it to demonstrate to yourself exactly which things you will work on in practice. For example if you are making way, way too many errors you will need to work on consistency. Pat Cash won the final of Wimbledon by having 15% unforced errors. That means you can make 15 errors for every 100 hits !! Can you do that ? You may find the stats tell you your forehand is ok but your backhand is much weaker; so off you go and fix your backhand technique. The stats may say “you never went to net”. Then why not ? Are you afraid of net? Are you unsure of your volleys? Then start work on improving that section of your game. Or the stats may say your crosscourt forehand is ok but your down the line forehand makes too many errors. So off you go to practice that shot.

This morning the stats came in from the Nadal/ Djokovic match. This match was to be the match of the year.Nadal has been almost unbeatable on the clay in Paris; but Djokovic is clearly the form player. I was discussing this match last night with Herold (club coach at Port Douglas TC); we both felt that past results mean nothing when there is a major difference in current form. Current form means the player is playing with confidence, and that certainly describes Djokovic and not Nadal. Anyway, the stats from their match is revealing.

Here are what I consider to be the critical items in their stats.

I have not seen the match, but to me these stats are saying Djokovic completely controlled the match 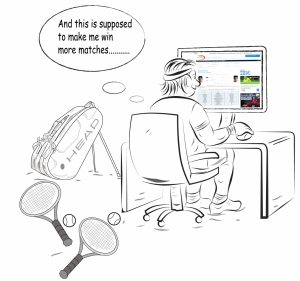