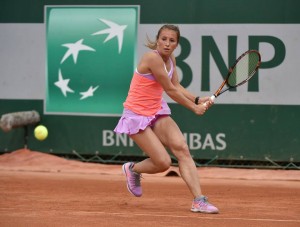 Why do I like this photo ?
Well, mainly because there is so much information within the pic. Things like…where and when. The first thing that caught my eye was the soon to be planted right foot. And what is so important about that ?
Well, the great players, if humanly possible, get at least one foot planted so that they can thread the needle with their passing shots. Players like Agassi, Hewitt, Nadal, Murray, Djokovic, Serena Williams are so well balanced just before they hit the ball, again if humanly possible. Then the next thing in the pic is…..where is that right foot going ?
It will go forward ! If you want more controlled power, you need to be moving your body weight forward before you make contact with the ball.
And then, if you have ever played on clay you will know that probably the girl’s left foot has already done some sliding and now in the pic the sliding is finished. What will happen next ?
The right foot will start to come down and plant, the body weight will continue moving forward and the racket will begin its forward swing. All this movement will be smooth and rhythmical and coordinate with the arrival of the ball. Magic you say.
Not really, as that part truly is quite easy for the average athlete who has done the correct amount of practice. The secret is in all that was done before the time slot of this frozen pic. I can visualize from this pic, all the moves that were made initially. And I have heard hundreds of coaches yelling “get your racket back”. And some yelling “turn”. And some yelling “do it now”.
In the above story an important item was not fully mentioned…that was “when” would everything be taking place. And that is connected to “when” do you do the preparation ? And for the average player your “when” needs to be earlier than you realize. That is why so many coaches are yelling at you to get going “now”.
So the girl in the pic would have reacted early, made her decision on what sort of shot she would need to play, and where she would have to go, and how much total time would be available. And she would have turned early , and started moving/running early and got her racket back early enough. And because of her previous training, this early use of time would give her time to find the right place on the court before any planting of the feet. These are the things which make hitting a perfect shot happen easily and relatively effortlessly.
And as I looked at this pic all the above items passed across my mind’s eye, like a slide show.